LAWRENCE — The Kansas Repertory Theatre has appointed Peter Zazzali, assistant theatre professor and internationally recognized artist and scholar, as its first artistic director. The appointment follows three successful seasons of the professional repertory arm of the University Theatre and will provide additional creative vision on which to build its reputation. 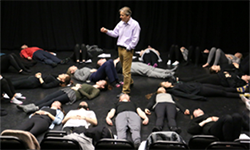 “KS REP is Peter’s brain child. He has worked diligently, along with our amazing faculty and staff, to build this repertory company from a seed of an idea into a thriving company,” said Nicole Hodges Persley, associate professor and acting chair of theatre. “As artistic director, my hope is that Peter will continue to raise the profile of KS REP to a national level that will attract professional actors and directors to come to Lawrence in the summers to work with our amazing student actors and for audiences to flock to Lawrence to see the excellent work that is KS REP.”

Last year The Pitch lauded the Kansas Repertory Theatre as “Best Discovery” of an emerging professional theatre, saying KS REP had officially “made our mark” on the Kansas City theatre scene.

“My vision for KS REP is to build on its sterling regional reputation, for our professional reputation to eventually grow to the national level,” Zazzali said. “In doing so, we enrich the education of our students, provide developmental opportunities for faculty and raise our theatre department’s standing nationwide.”

Zazzali is a theatre director, actor and scholar whose work is recognized internationally. He has acted and directed in more than 150 productions with institutions such as the Acting Company, Guthrie, George Street Playhouse, Western Australian Academy for the Performing Arts, and New Jersey, Texas and Utah Shakespearean festivals.

Zazzali’s scholarship has appeared in numerous peer-reviewed journals and prominent theatre magazines such as Theatre Journal,  PAJ, Voice and Speech Review and American Theatre, among others. His current book, “Acting in the Academy: the History of Professional Actor Training in U.S. Higher Education” was released last year by Routledge. He is a member of Equity, SAG and the SDC.

“As a director with diverse experiences at the university, national and international level, he is especially equipped to guide our emerging actors to push the boundaries of their abilities to reach new heights as they prepare for careers as professionals in the entertainment industry,” Hodges Persley said.